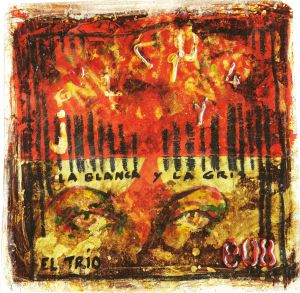 Two years on from the debut, and El Trio were back with their second album ‘La Blanca Y La Gris’ (The white and the grey). I tend to play albums initially through iTunes, and this was the first one of theirs that I heard as it was the first one to appear in the playlist due to where the title appeared in the alphabet. What this meant was that I managed to treat myself to possibly the worst introduction to the band, as while the jazz rock is forceful with a huge input of blues, along with South American influences, it is also the one where the vocals jar most for me. Jonatan has a vocal style that seems to either work very well and is totally in keeping with the music or isn’t working at all, and when it is the latter it is quite painful.

But, he more than makes up for it with some great guitarwork again. There was a line-up change between the two albums, as drummer Pablo Peña had departed to be replaced by Johandy Ureña. They also brought in an additional percussionist, as well as a guest guitarist on one number and a guest trombonist on another. The music is more forceful than the debut, and is a real progression as they have expanded but to my ears it would have been better either as an instrumental release or with a different vocalist. Again, digitally reissued in 2017 by Progshine Records.