Down'n'Outz - The Further Adventures Of... DVD 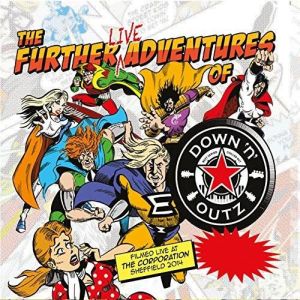 While the two studio albums are reissues, this DVD/2CD set, recorded at Sheffield Corporation in 2014, is a brand-new release. Sadly, I don’t have the DVD to review, but a quick trawl of YouTube made me realise that the opening number “Funeral For A Friend/Love Lies Bleeding” not only features Joe sat at a piano, but he is so far off to the side of the stage that he’s almost not on it! After an opener that lasts more than eleven minutes, it is front and centre for the bombastic “One More Chance To Run” – when I first heard the original all those years ago I loved it so much that I went out and bought the album, and now here we have it with Joe not only providing lead vocals but rhythm guitar, taking the band to three!

This album is just one hit rock song after another, all being played by great musicians who have all cut their teeth on numerous high-profile gigs. They play with the tightness that only comes from years of hitting the boards, yet also with a looseness as they are playing songs that were written and made famous by others, knowing that they are in front of not only of fans of what they do and their own music, but also the music made by others so many years before. This is a great live album, played by musicians out to have a blast, and who are enjoying it at least as much as those watching them. Not all side projects are a success, and not all cover bands are worth the price of admittance, here you get both, in spades. Now all you have to do is get out there, enjoy this, and then do some research into the originals, take it from me it is all definitely worth the effort.