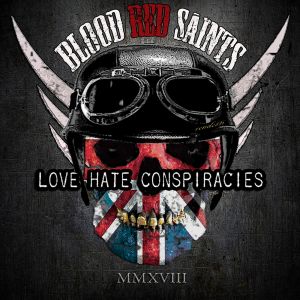 Blood Red Saints are a band new to me, but apparently, they released their debut in 2015. Although, it has to be said, that looking at the band photo these guys have all been involved in the scene for quite some time, as they’re not as young as they used to be. That isn’t a problem for me, as they really know what they’re doing, and have produced a melodic hard rock album that would put many people half their age to shame. There has been a line-up change since the debut, and original members Pete Godfrey (vocals), Rob Naylor (bass) and Lee Revill (guitars) have been joined by Neil Hibbs (formerly of Arkhams Razor, Shy) on guitar and drummer Andy Chemney. Andy had worked with Rob in their previous band 'Angels Or Kings'. Rob takes up the story. "I've known Andy nearly all my life, he was the guy I wanted for our band and we are so pleased to have finally got our man".

What we have here is ‘Pyromania’ era Def Leppard, combined with some overt Americanisms, and bloody good it is too. They have anthem writing down to an art form, with hooks and harmony vocals aplenty, while in Pete Godfrey they have a singer who combines melody with a roughness, just harshening the sound slightly to give them an edge. The drums are all over the place, doing whatever is needed to drive the sound, the bass is melodic and then there are two crunching guitarists who can also solo like the devil when the need arises. Melodic hard rock can often come over too sanitised in the studio, but this album keeps it neatly balanced, while also promising more when the band hit the stage.