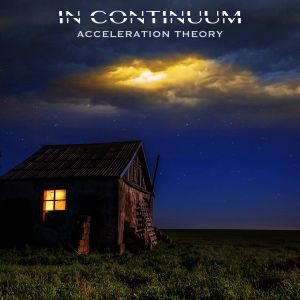 Singer, keyboard player and guitarist Dave Kerzner (Sound of Contact) has started a new project with In Continuum, based around a core of himself and Gabriel Agudo (Steve Rothery Band / Bad Dreams). The concept of the band itself is that it will involve a revolving cast of musicians, almost in an Alan Parsons Project style, with different people being brought in to add different elements. For the debut that includes Matt Dorsey (Sound of Contact), Randy McStine (Sound of Contact, The Fringe), former Porcupine Tree and Sound of Contact touring guitarist John Wesley, drummers Marco Minnemann, Nick D’Virgilio (Big Big Train, Spock’s Beard) and Derek Cintron along with guitarist Fernando Perdomo from the Dave Kerzner Band. Special guests on the album also includes Steve Hackett, Jon Davison (Yes), Steve Rothery (Marillion) and Joe Deninzon among others

As can be seen from the album title itself, the debut is being viewed as telling the first part of the concept, which is based on a science fiction short from Dave, set in the year 2074. The booklet is fully detailed including who plays on what song, lyrics, plus the story itself. This is a very polished album, one which I fell into the very first time I played it. There are obvious links with Alan Parsons, Steve Hackett, GTR and Asia and feels very Americanised indeed, but I mean all of this in a positive light. The songs are strong, with more than a hint of ELO at times, which they need to be given the performers who are involved. Songs such as “I Remember” are bright and clear, with some inspired guitar at the beginning from Randy, and some stunning vocals from Gabriel. Marco is quite restrained (for him) on this track, but there are others where both he and Nik are out to show just why they are regarded as two of the finest drummers around.

Commercial and immensely enjoyable, it is an album which rarely feels as if it is a group of separate musicians as opposed to a band, and probably the single biggest impact on this is the violin of Deninzon as when he is involved in a song the ear is instantly drawn to what he is doing. Overall this is a great debut album, and I am certainly looking forward to the next instalment.