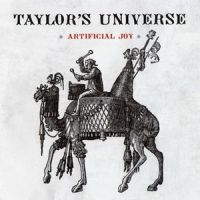 ‘Artificial Joy’ was the second album from Taylor’s Universe in 2009, and while the line-up is similar to the one that appeared on ‘Return To Whatever’ of course there are some changes. Although the comment appears in the booklet ‘For maximum effect, play it loud!’, and Michael Denner is again on hand this isn’t nearly as rocky as one may imagine from that comment. There are elements, especially in Michael’s tortured solo in “Atmosfear”, where progressive elements stand out but for each of these there are also the more restrained layerings I have come to expect. Robin’s keyboards are at the heart and in many ways this is the perfect follow-on to the previous album although with not quite as much edge and excitement.

It is an extremely cohesive album, with some wonderful clarinet solos and great interaction with the sax. One of the huge strengths of Taylor is that he brings together musicians and instruments in a way that totally makes sense. The previous album to this one featured violin as a foil against the sax, here it is a clarinet. Denner played on six out of seven tracks on the previous album yet here has a much smaller role allowing Taylor the opportunity to play some guitar of his own. Robin is very much a composer, a bandleader and arranger, who has a vision for each album and yet again this is one that is well worth discovering.