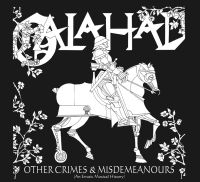 At the beginning of 1992 Galahad released a cassette-only compilation of rarities as ‘Other Crimes and Misdemeanours’. It has now finally been made available on CD, subtitled ‘An Erratic Musical History’.  It is in a nice digi-pack format using the artwork from the band's only single release 'Dreaming From the Inside' (from 1987 – but actually isn’t on this compilation, need to go to Part II for that). Here we have a band that was in a fairly fluid state – although they did have the same lead guitarist and singer through this period, there are nine other musicians also forming part of the group at various times. Strangely, there is a far more cohesive element to this CD than one might imagine. Some of the songs (such as “Painted Lady”, “The Chase”, “Aries”, “Welcome To Paradise”) were re-recorded in later years while others such as the awesome (to my ears) “GSX” sank without trace.

It may be imagined that only die-hard Galahad fans will be interested in this , but actually anyone interested in the neo-prog movement from the UK should seek this out as there is way too much great music on this CD for it to just sit gathering dust and all power to Polish label Oskar for getting it out there.