Ghost Circus - Across The Line 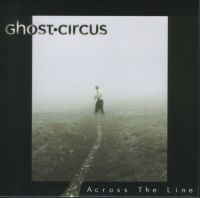 This 2008 album was the second from multi-instrumentalists Chris Brown (from Tennessee) and Ronald Wahle (from The Netherlands) who ‘met’ in 2004 on a Neal Morse message board. In fact, these guys have never actually recorded in the same studio, but somehow have produced an album that sounds like a full band and not a project in any sense of the word. Chris provides vocals, lead guitar, rhythm guitar, bass guitar and keyboards while Ronald provides drums, percussion, keyboards and rhythm guitar. Having ‘live’ drums makes all the difference to any band, and when these guys crank it up they drive the music along. What makes this such a fine album is the sheer diversity of styles on play, so while they seamlessly move through symphonic prog, plenty of moogs etc they also bring in melodic hard rock and AOR-style vocals.

Melody is the heart of what they are doing, combined with a real sense of not wanting to stay within any particular style but instead going where the music leads them. This means that a Saga style prog epic such as “Holding On” has a great singalong chorus that will stick in your head and stay there. They even have a 25 minute plus song, and why not!? Accessible, fun and full of balls, this is a great album.