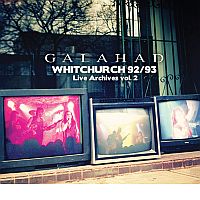 May 22nd 1992 saw Galahad headlining again at The Standard, Walthamstow, this time with a five-piece Freewill (which only lasted a couple of gigs before moving to a four-piece) in support. It would have been auspicious in itself in that it was only a month since their last gig at London Astoria yet in between they had settled in a new bassist in Neil Pepper (Tim Ashton having moved to Japan), but what was also of interest was two shady characters in the audience (okay, there would have been lots of shady characters, myself and Matt Ellis for starters..), Pete and Dave Martin. Pete was landlord of a village pub and thought it would be a great idea to hold prog concerts in the hall which was the other side of the street. And for the first gig they wanted the same bands from that night, Galahad and Freewill.

Now, no-one really knew what was going to happen, but on July 18th 1992 a few of us descended on a sleepy village not far from Basingstoke. In the village hall there was corrugated cardboard over the windows to act as noise insulation, and it didn’t really look like a prog haven. Could it ever be more than a one-off?

Being a contrary person by nature, I am going to review the second disc of this two disc set first, just because I feel that is the right way to do it. This is an audio recording of the above gig, capturing the band in full flight. I had forgotten just how powerful a rock act Galahad are in concert; this was my third time seeing them that year and this disc brings it all back. The sound is really good all things considered, so I presume that it was recorded on DAT through the mixing desk as this is definitely not an audience recording. It is raw, it is powerful, it is dynamic, and shows the band just as they started moving away from ‘Nothing Is Written’ and towards ‘Sleepers’. Only two ‘new’ songs were aired, “Dentist Song” and “Exorcising Demons”, with the rest being from ‘NIW’ or earlier. This was one of the few times I heard them play “One For The Record”, one of my personal favourites from ‘In A Moment of Madness’, but for many reasons the highlight of this set is “The Automaton”. This was one of Neil’s finest moments, he may not have played on the original but here he owned this song, not just because of the solo but with the different playing techniques he utilised which drove the attack. To be honest, I would be urging people to get this just to see what this band sounded like twenty years ago when they were still young and precocious. But what about the first disc?

The gig went well, lots of locals turned up, and it was obvious that this was the beginning of something special within the prog scene. More gigs took place at Whitchurch, including Galahad and Freewill (this time also with The Morrigan) back at Christmas. The following year they were invited back for their third appearance, this time with Shadowland in support, and this time it was recorded on video and audio. Lo and behold, that is disc one. Now, as this is a single camera the main focus is on Stu, while Neil and Roy do also feature quite strongly but Karl and Spencer only appear on wide shots. It was never expected to be made commercially available but was for a private collection, so don’t get this expecting multi-camera high definition. This is someone at the back of a very sweaty and loud group of people making a recording, and to be honest they have done a bloody good job. I’m not too sure about some of the effects deployed, but I am just glad that someone had the presence of mind (and the equipment, it wasn’t cheap back then) to record the boys back in the day when Stu had hair……This saw a move towards newer  material including “Sleepers”, “Learning Curve” and “Before, After & Beyond” (and even a cover of “Sylvia”. Stu makes the comment that the next album will be out in 1998 the way it was going, he was wrong in that they got ‘Sleepers’ finally out in 1995 some two years after the gig but shows some of the frustrations they had at the time.

Overall this is a great release, and for me brings back many great memories and for those who followed the British prog scene in the early Nineties I am sure that it will do the same. And if you weren’t there then it just shows you what you missed.