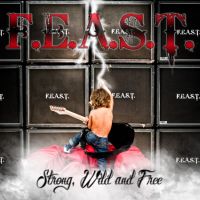 There should be a law against naff band names and album covers. I mean, this looks as if it came out in the Eighties and was destined straight for the bargain bins. Instead, this is a brand new album from Luke Ballabio  (guitar), Angelo Perini (bass) and Mao Granata (drums) and main song writer, lead vocalist and guitar player FabriKiareli, who not only has this band but also plays in The Trip and UT. Somehow, since their debut came out two years ago the band have played more than 120 gigs, even with his touring with the other bands, and now they are back with the second. When I saw the name and the artwork I felt that I knew what to expect, but the more I worked through the album the more I enjoyed it and by the end did the correct thing, i.e. put it on again.

This is solid hard rock/power metal with nods to bands like AC/DC, The Faces, Dogs D’Amour and a whole host of others. It isn’t anything new or special, and it doesn’t take a degree to understand what is going on, but sometimes fun melodic rock and roll is all you need. Keyboards make a slight entry here and there but this is all about melodic driven rock guitars with slightly raspy vocals. IN fact the only thing wrong with this is the artwork and the bandname, but look past that and you will find a hidden gem.