Quake The Earth - We Choose To Walk This Path 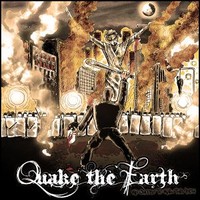 This album isn’t out until the end of November, but is sure to make some waves when it does as here we have the intensity of hardcore combined with Metal in a Pantera meets Hatebreed meets Lamb of God meets Biohazard meets Meshuggah mentality that is going to make the band a lot of friends. Although the group has only been going since 2010, all of those involved had previously been in other groups so knew what they were doing. It is not just the intensity and groove that makes this album a bit special, it is that the guys are so tight and together. There are definitely some hints of Korn, but it never loses the intensity of being in your face metal and the mosh pit at their gigs must be intense. There is some great music coming out of Finland at the moment (and the vast majority of it on Inverse as well), and this is yet another band that are definitely worth investigating if you want to play it loud enough to make your ears bleed. Solid stuff, with slabs of riffs that Meshuggah would be proud of.