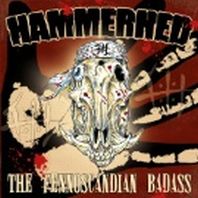 This is the second album from this Finnish Quartet, and somehow they have managed to mix something that is melodic yet brutal, streetwise and harsh but with a finesse. They describe themselves as “a group of metalheads doing what we can with what we have. Metal, thrash, punk and all the forms of underground expression have always been part of our lives one way or the other. Our main influences are both obvious and glorious; Pantera, NYC-hard core, metal groups such as Anthrax, Sepultura, Prong and Fear Factory, thrash killers like S.O.D. and Carnivore, and cross-overs such as Suicidal Tendencies. To us it was never more than one scene of hard-ass music, no compromise, no bullshit. In that way we are old-school; alien to the genres and classification that has somewhat crippled the nowaday's metal movement. We put together what is important to us, and no doubt important to you too, the brutality, the strength and everything we know how to do well. This is, and always will be, our street metal aggression”.

You can easily add Lamb of God into their list above, along with a decent amount of Biohazard. It is not hardcore, nor thrash, although it contains elements of both of those, but is a broad-based metal album that is going to appeal to a lot of metalheads. “Righteous Hammer” is one of the fastest songs on the album and the guitars are linked as if they are one, incredibly impressive and superbly heavy. I am sure that these guys must be seen in a live environment to be properly appreciated, but until you catch them at a gig then this is a worthwhile substitute.