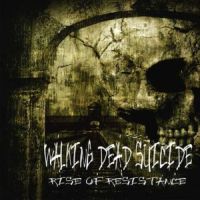 It is not often that I find myself at odds with a record label description, but these guys have been described as progressive death metal and I don’t really get that for them. True, they definitely have feet firmly planted in the death metal camp and also do some different things with timing, but progressive? I think not. They slow right down at times, normally with gruff vocals, but I found myself a little confused as to what they were trying to do as some songs just seemed to peter out with little direction, and there were others when I felt that the bass wasn’t as tight to the guitar as it needed to be and was a little disjointed. I think that they were trying to be different to the rest of the death metal brigade and they have achieved that, but possibly not in the manner they wanted.

I’m not sure why the band rushed into the studio. They only started to come together in Spring 2011 yet they already have an album out, and possibly more gigs etc would have been better first. As it stands this isn’t something that I will be repeatedly playing – let’s see what happens in the future.