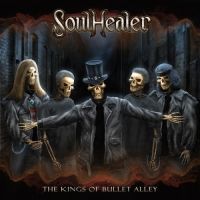 The foundation for what was to become Soul Healer was laid in late 2009 in Kajaani, Finland, and it wasn’t long before they recorded their first EP, “Dreamcatcher”, which quickly sold out. In 2011 they recorded and released their debut album ‘The Kings of Bullet Alley’, and this has now been reissued by Inverse Records with the songs from the EP included as a special edition. The very first time I played this I was incredibly impressed, as this is a melodic hard rock/metal album that is very polished for a debut and somehow manages to mix some 80’s influences with those of the current day. So while there are some Maiden, Krokus and Accept touches here and there, there is also plenty of Blind Guardian and Sabaton.

This is the sort of metal that I grew up with (thrash, death and black metal hadn’t really started then – yes I’m a dinosaur) and so I found that I was listening to this with quite a smile on my face. There is some great guitarwork with some blistering passages and Jori Kärki has a great vocal range. They know when to provide plenty of riffs and also when to go for the more balladic style and the result is an album that is mature and fun all at the same time. It will be interesting to see what the next release is like (they are currently in the studio) and whether they put in a harder edge (which would work really well) or if they follow the same musical path. Worth investigation.