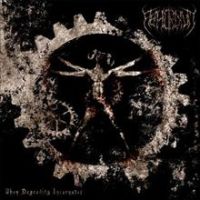 Abhordium is a Death/Black Metal band from Salo, Finland who came together in 2005. The current line-up is Arttu Aalto (drums), Kari Laaksonen (vocals), Jarkko Neuvonen  (guitars) and Jussi Saarinen (bass). The first demos were recorded in 2005-2006 and were released through the internet then in 2009 they released the EP “Declaration of Perdition”. So ‘When Depravity Incarnates’ is their debut album, and it was released in their own country in the summer of 2011 but has now been made available worldwide by Inverse Records. According to the label their style is “chaotic and brutal”, but the question has to be asked, is it really?

This is powerful death metal, and there is no doubt that the guys know what they are doing and have decided upon which musical path they are going to go down, but it’s not really brutal enough to get away with that style alone. The guys are tight, but the production isn’t doing them any favours as it is fairly lightweight and needs much more bass. The end result is an album where it feels that the band have much more to offer than what is on show here – it just isn’t pushing any boundaries so sits in the middle of the genre, and these days is that really enough?

But I do think that this is a band to keep an eye on, and it wouldn’t surprise me to find that the next one is much more powerful than this. If you just can’t get enough of this type of music all well and good, but if you are looking for something slightly different then this isn’t it.