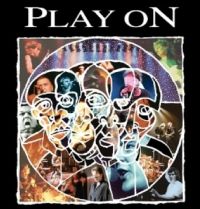 Everyone has some musical regrets, whether it is only discovering a band post their demise or never taking the opportunity to see someone in concert. I have many, from not seeing Thin Lizzy, Yes, Gentle Giant, King Crimson or Pink Floyd in their prime, but the one that rankles most is Twelfth Night. In 1985 I was living in London and attending many gigs, but I hadn’t even heard about this group. Move forward some years and I was introduced to their music and couldn’t believe that the group had existed and I knew nothing about them. I couldn’t make a combined gig of Galahad and Geoff Mann but that was okay as I expected to see Geoff support Shadowland and Jadis. Sadly Geoff was too ill for that gig, his place being taken by Damian Wilson. After Geoff sadly passed away the band reformed to record “Piccadilly Square” for his tribute album, but no gigs were forthcoming. Clive was living in Australia; Andy Sears was in Spain and although I was in regular contact with Brian Devoil, interviewing him a couple of times, I really thought that was the end. But of course, just as I moved to NZ, Clive moved back to the UK and a reunion was on the cards, and although Rick was unable to rejoin the rest of the band went out and played some shows! This year Andy Revell has left, and the band have brought in Roy and Dean from some outfit called Galahad and increased to a six-piece line-up and are again going to be playing some gigs. I still haven’t seen them as I am on the other side of the world! C’est la vie.

Anyway, while I am still missing out on seeing the band live, I and other fans have been spoiled with all of the reissues and live concerts that have been made available on CD. The ‘Live In London’ set has been released on DVD and there are going to be more shows and treats available soon. One of the real joys that has come our way is this book by Andrew Wild, which has to be one of the most complete and researched books about a band I have ever had the pleasure to read.

Andrew has interviewed everybody who has ever had anything at all to do with the band and has been allowed unlimited access so that what we have here is an exhaustive and extensive tome that will satiate all lovers of the band. But it is much more than just a book about a criminally overlooked act, it is about how a group that was recording incredible music and playing to sell out crowds never got the rewards they deserved. If you turn the book over to read the rear cover  it starts with “This is a cautionary tale: how a combination of industry pressure, bad timing, bad luck and bad decisions can negate almost 10 years of musical innovation, progress and sheer hard work”. Remember, to many people this was the prog band that was going to succeed, and to my ears ‘Fact and Fiction’ is still one of the greatest albums ever released of any genre. But, only a lucky few have ever come across it – yet if you enjoy the genre your collection cannot be called complete without it.

The book contains details of every song ever written, every recording and every gig. It tells how the band started as a duo and what events led to their demise and in turn how they got back together. There is the tragedy of Geoff’s death, and the delights and celebrations of the Reading Festival and getting the deal with Virgin. Simply put, it is one of the finest musical biographies that I have ever had the pleasure to read. But there’s more!!!

Along with the book there is a DVD which contains just about everything a fan could wish for! There are clips of archive performances on video, unreleased music, a complete set of all of their newsletters as PDF’s, examples of merchandise, guitar tabs, interviews – it seems to go on forever. Without the DVD, I love this, but with the DVD this becomes totally indispensible to the fan. Incredible.

For more details visit www.twelfthnight.info  - and go and see them play in May as a six-piece for the first timer in their career!!