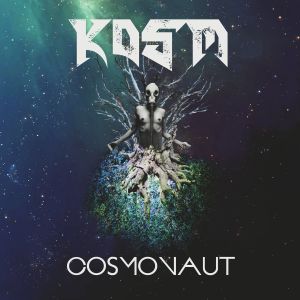 Kosm are a Vancouver-based quintet who have been around since 2016, and if the photos on their site are anything to go by, they have already built up a substantial local following and this is their debut release. They cite Tool, Mastodon, The Agonist, Gojira and A Perfect Circle as just some of their influences, and all of them are readily apparent in this bass-heavy rhythmic release. Patterns come in and loop around, sometimes returning, while at others they dissipate into the ether. Apart from numbers such as the title track, this is a very heavy album, and one of the issues some bands have with going down that musical path is they are unable to find a singer who can stand out and not only make themselves heard but add to what is going on beneath them. That is certainly not an issue here, as singer Jessie Grace is in total control at all times.

There are far too few female singers in the metal genre, certainly in this sub-genre, as this is almost sludge at times as they slow it down and delve into the mire, but Jessie is always shining above it all. To say I am surprised they haven’t already been grabbed by a major label is something of an understatement, as here is a band with attitude, songs and image which combine with the performance to produce something quite special indeed. I defy anyone to hear “Space Mead” and not join on the chorus, as it is both infectious and compelling with some great hooks. Certainly one of the most exciting Canadian debut releases I have heard for a while, this is a band to keep an eye on.