Kinetic Element - The Face Of Life 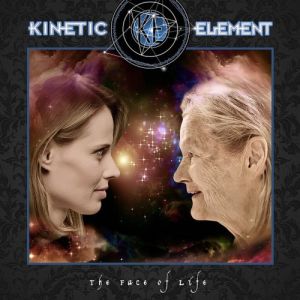 Originally formed by keyboard player Mike Visaggio, only drummer Michael Murray is still involved from the line-up which recorded the debut album ‘Powered by Light’ back in 2009. Bassist Mike Tupko was there in time for the second, 2015’s ‘Travelog’, but 2019’s version of the band sees them add Saint John Coleman on vocals and Peter Matuchniak on guitar. I have been fortunate enough to hear quite a lot of Peter’s output over the years, and am a huge fan of his, so was really looking forward to playing this and I certainly wasn’t disappointed.

I was smiling before I even opened the CD as on the rear was the track listing, as is normal, but what makes this different is that it was shown as Side One and Side Two, and even the CD itself has been printed so it looks like a record. In addition, the total length of the album is just over 46 minutes long, and anyone my age will know that the most popular cassette length of the day was the C-90 which allowed a person to record an album on each side, so this doesn’t quite fit but is a welcome change from the 70 minutes which seem to be de rigeur for CD releases these days. Needless to say, this has also been released on vinyl.

But could the music live up to all my expectations once it made it to the player? Of course it did. The album has been mixed so there is room for everyone to make their presence felt, and in some bars I felt the bass was the most important instrument, at others it was the drums, so it wasn’t always the guitar or keyboards although the melodic line would always come back to these given all the songs were written by Visaggio. It is hard to comprehend that Saint John Coleman is best-known for performing with cover bands, and also that he wasn’t grabbed by the band when he initially attempted to join them in 2013, as he has a great voice which fits in perfectly with the band’s Seventies-style progressive rock which has been influenced very much by the likes of Kansas and early Rush.

It feels very American indeed, and given the guitarist is English, the bassist is Polish, and the singer wears a kilt, that may be somewhat surprising. In many ways it feels like a comfort blanket for me as this reminds me so much of the progressive rock I grew up listening to, sat with the album sleeve reading the lyrics and studying the artwork as the vinyl was on the player. This really is a step back in time and is all the better for it. Let’s hope this line-up keeps together as I am already looking forward to the next album, as sections such as in “All Open Eyes” where bass and drums combine to provide the structure for Mike to place symphonic keyboards against, and then Peter soars over the top, is just sublime. It is hard to pick a favourite as they are all so good, but with just four songs there is plenty of time and length for the guys to spread their wings and they do so with ease. From harmony vocals through to rock, this is a superb example of American progressive rock.