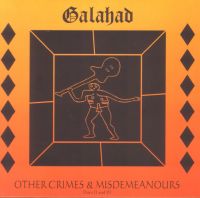 Back in 1995 Galahad released a fan-club cassette, called ‘Other Crimes & Misdemeanours II’, which was then reissued on CD in 1997 including an introduction by yours truly. ‘OCMIII’ then followed in 2001 and now Oskar have made this available as a double CD digi-pak with  a great booklet containing all of the information you could wish for along with 40 minutes of additional music! If you wish to hear Galahad’s only single (of which only 500 were pressed back in 1986) then this is the place. The two songs kick off proceedings which have been broken down into sessions, with the notes stating who was involved, where and when the recordings took place, and some history behind them.

Of the additional material, the 23 minute long instrumental medley has reached some fame (Stu was ill and had to miss the gig) so it was great to hear it after all this time, along with an instrumental only version of “Lady Messiah”. The bonus material on the second disc comprises a song called “The Pleasure House” that was recorded in 2000 and appeared on a concept album along with songs by other bands.

This is a wonderful release, packed full of information as well as great music, and I urge all fans of the band to seek this out at once if not sooner.