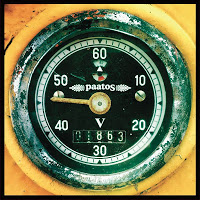 Paatos were formed in Sweden in 2000, and was originally formed by two guys from Landberk (Reine and Stefan) and two from Agg (Ricard and Johan) to act as a backing band for the folk singer Turid. From there they decided to create their own band and brought in Ricard’s partner Petronella as lead singer. A year later they recorded their first single, “Tea”, which had been written for them by Turid. Now all these years later they have released their fifth studio album which has four new songs and four that have either been revisited or remixed, and “Tea” is one of those.

Although I haven’t heard their last studio album I do have the other three and I have always been impressed with the way that Petronella’s clear vocals work so well with the often complex and sometimes dissonant music that is underneath. She soars high above whatever is going on, allowing the guitar to play chords, pick a few notes, or even be absent altogether. These are songs that don’t look back in the way that some prog music does, but instead is all jagged edges and being very much of the present. In a perfect world this would be chart music or at the very least get radioplay as it brings the listener into their world yet manages to maintain a certain commercial feel throughout. There are some who will question if this album even fits into the genre at all, as it is right on the edge, but to be honest who cares? This is a really strong album, with powerful yet ethereal female vocals and is one I could play all night.