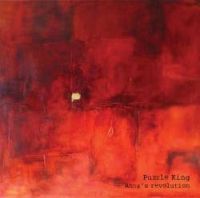 Puzzle King is a project by François Puzenat who for his debut concept album wrote the script and lyrics, composed the music, programmed the drums, recorded the guitars, keyboards and vocals (in French and English) and added sound effects. The bass was recorded by Nathalie Prost while Guillaume Ninon from Studiolaf (Nemo, Wolfspring ...) was responsible for the mixing and mastering. It tells the story of two lovers during the Russian Revolution, Anna and Anatoli, who are struggling to preserve their love in spite of the war, in spite of the revolution. So, quite a concept, and one that is very personal to François whose grandparents were inspired by the Russian revolution as they were growing up in France.

My views of the album have changed quite a bit the more I have played it, and although there are some high points this is more points for the idea than the execution. The vocals don’t always work, and it really does have the feeling of a solo project as opposed to band effort. For me this just doesn’t cut it in terms of musical ideas and execution, and I found that I was really only playing it repeatedly as I had to review it as opposed to playing it because I enjoyed it. It is not an awful album, far from it, but it just doesn’t work for me. It scrapes three stars as I think it would be unfair to give it two, but if I was able to give it 2.5 then that would probably be the fairest mark. However, François has created an interesting website with lots of information: www.puzzlekingmusic.com.