Kebu - To Jupiter And Back 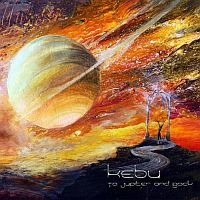 I first came across keyboard player Kebu when he was playing with Prime Mover, and now here we have his debut solo album which when released charted in the Top 30 in Finland. This is a fully instrumental album using vintage analogue synthesisers and was recorded using only sequencers, tape machines and analogue mixers. This in itself gives the album a very distinctive sound, and in many ways is also quite dated. Although Kebu lists a few musicians that he feels he has been influenced by, one stands head and shoulders above the rest, Jean Michel Jarre. Yes, here and there one may say that this is more Kraftwerk, or more Vangelis, but this is all about layers of simple repeated structures. Once could never play this and think that this was an album by Tangerine Dream or Rick Wakeman.

It feels modern, yet also thirty years old, which is due to the sounds being deployed and the way that he has approached the arrangements; and for a style of music that can be clinical in the wrong hands this is surprisingly warm and embracing. If you enjoy the style of JMJ then you will get a lot out of this, if not then look elsewhere.