Galahad - In A Moment Of Complete Madness (English version) 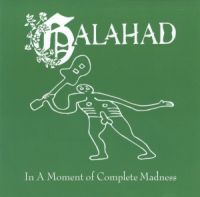 So, here I go again. The first time I reviewed this album it was a tape (called ‘In A Moment Of Madness’) which was released in May 1989. By popular demand it was then reissued with additional tracks (and slight name change) on CD in April 1993 and it has now been reissued again with yet more additional material. So what do I think of it more than 20 years since the original five songs were released?  I love it. I always have. I heard this for the first time too many years ago to even think about and all of the songs are old friends. Just putting this CD into the player brings a smile to my face – how can anyone not love the sheer innocence of the early days of Galahad? The band that released ‘Empires’ is very different to the band that recorded these songs, albeit three of the five guys were on both. There is a joyous naivety of a band that had yet to record a CD, yet to appear on Radio One, yet to tour on both sides of the Atlantic. At least one number from the original five still appears in their setlist which shows just how strong the songs are.

Moving forward to 1993, the band re-recorded another three of their older songs – which was the first appearance with Galahad of bassist Neil Pepper who has recently returned to the fold to play with the guys again. In many ways this made the album more complete as not only was it now longer and more like album length, it closed a chapter.

But, now there’s more!! Where were you on December 12th 1992? I know exactly where I was, in a small village hall with condensation running down the walls watching two of my favourite bands, Freewill (I used to write their newsletter you know, those were the days…) and Galahad. Galahad subsequently released most of the concert as a cassette, and for some reason it has still to be released on CD, and three of those songs have now been added to this reissue. If you want to know what the guys sounded like eighteen years ago then here is your opportunity. This predates their official live album by more than three years and to me is a sheer joy as it was the time when I was seeing them play as often as I could.