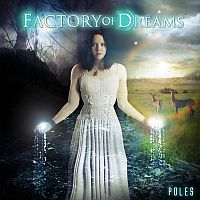 Multi-instrumentalist Hugo Flores first came to attention with his debut solo album in 2000, after which he formed Sonic Pulsar with whom he released two albums. From this he formed Project Creation (two more albums) and then in 2008 he felt inspired by vocalist Jessica Lehto to create new music outside of the style he’d been working in previously, and formed Factory Of Dreams. Jessica started off by listening to metal oriented bands such as The Gathering, Within Temptation, Nightwish and Blind Guardian and from the age of 17 started writing her own material, obviously influenced by her earlier interests.

For this the debut, Hugo provided electric and acoustic guitars, bass guitars, synthesizers, additional drum arrangements and loops, percussion, sitar, 12 string guitar emulation; Chris Brown provided fretless bass while Jessica sings – like an angel. I have found it really interesting to see this reviewed on the web, obviously in some cases by people who have never listened to black metal (!!) yet feel that this is atypical. What we have here is a wonderful symphonic melodic rock band very much in the style of Within Temptation, with perhaps a tad Lacuna Coil. Jessica is a stunning singer, very clear diction and great control, while Hugo is a consummate musician and songwriter so overall it is a great combination. If you enjoy this style of music then this is definitely worth searching out.