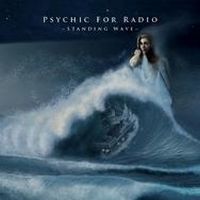 As well as being head honcho at Progrock Records, Shawn Gordon also runs an internet radio station at progrock.com. There are more than 20,000 songs loaded and they are played randomly. One day Shawn went out for a walk and as one does, started listening to a song inside his head – “Cities”, by Henning Pauly’s band Chain. When he returned to the office, not only was that song playing, out of a random list of 20,000 songs, it was at the same point as the playback inside his head.  He called Henning to tell him the strange occurrence, and declared that he was ‘Psychic for Radio’, and thinking about it, wasn’t that a great idea for a band name?

One thing led to another, and Shawn decided to get a band together to record his songs, some of which went back 30 years, but with lack of commitment he eventually hired Henning and together they brought in a load of musicians to work on the project and after only five years this is the result.

It probably isn’t a surprise that given the timeframe and the number of guests that this is more of a collection of songs than that of a distinct group identity, but for me this really isn’t an issue when the songs are as good as this. The first time I played this I picked up on “She Knows”, with delicate acoustic guitar, wonderful piano and flute (care of Martin Orford – time for another solo album Widge) that brings just right the feeling to the song. Todd Plant (Cryptic Vision) is the singer on this and he just nails it. In ways this is reminiscent of “Entangled” or “Mad Man Moon”, but it is more the atmosphere than the overall sound. Like all of the songs on the album this is extremely well produced (I would expect nothing else when Henning is involved), and the arrangement is both simple and complex. Peter Matuchniak nails a Hackett-style guitar solo which definitely adds to the ambience. I could play this one song all day, there is just something about it, but what about the rest of the album?

Henning is an incredible guitarist, as anyone who has heard any of his albums will know, so it is of no surprise that there are great riffs on some songs (along with some driving fretless bass from Miles Gordon), and also that in places this becomes much more of a rocker’s album than some progheads will appreciate. Sure, there’s Genesis in the odd place, and OSI in others, but this is all about producing great music as opposed to fitting within any particular genre. Even so, the choice of the cover version is a little surprising.

My personal view of cover versions is that if all the artists is going to do is exactly replicate the original then it is a waste of time for everyone. However, if they are going to try to do something a bit different then I am all ears. But “School’s Out”? Shawn’s idea was to have Nine Inch Nails meets Alice Cooper, heavy, industrialized, and over produced. Bill Berends of Mastermind (years ago I was lucky enough to see them in concert, and they blew me away) asked Shawn if he needed any guitarand the results more than speak for themselves. This is “School’s Out” brought kicking and screaming into the current day, as if Hawkwind and Poisoned Electric Head conspired together to have a bastard child and this was the result.

So, this is a proggy, industrial, commercial album loaded with great songs, numerous hooks and stunning performances from different musicians and singers who all add to the whole. I can guarantee that the more you play it the more you will get from it. Now does this mean we have to wait five years for the next one Shawn?