Boothill Regulators - Degradation Of The West 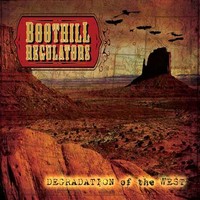 First of all you need to know that Kouvola is Deadwood and Kymenlaakso is South Dakota back in 1885. I don’t know why I bother to write reviews sometimes when bands put it so much better themselves. This is how the Finns describe their debut album “The clock closes down to noon as the shade of a rugged man grows towards the local saloons slowly squeaking doors. It’s the time to make a decision whether to kill the man who just entered through the door in a sudden raging gunfight or to wait a while and sneak up on him while he is sharing hisprivate time with the brand new whore in town. “Either way, his gold and his life is mine”, thinks the rugged man while rolling up one last cigarette. The soundtrack to this scene is played by Boothill Regulators. Ennio Morricone has released loads of awesome music throughout the years, and so have Hank Williams and Slayer. Add these alongside with Social Distortion, Entombed, Johnny Cash and Danzig and you’ll get the mixture that is “Degradation of the West”. This is music for the fat guys and skinny girls as a tribute to guns, tattoos, westerns, hookers and black labels.”

What can I add to that? They’ve got it right, particularly with the Cash mixed with Morricone mixed with Slayer – if ever something deserved the rather strange tag of ‘alt-country’ then this is it. And I like it.