Solitary - The Diseased Heart Of Society 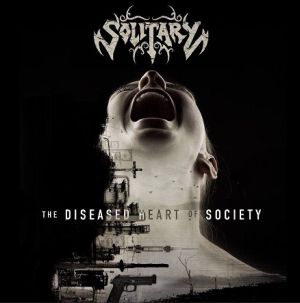 I’m not quite sure how, but this UK band have managed to pretty much pass me by, yet they have been going for more than twenty years, and this is their fourth album over quite a lengthy period (the debut was released in 1998). This is thrash, and thrash that has been heavily influenced by Testament in particular. There is just no way that I picked this band out as being British: I was convinced that they were from the Bay. The one thing that is immediately noticeable is that these guys are good, really good, and definitely know what they are doing and what they want to achieve. There is no pretence at pandering to fashion, this is all about playing the music they love, and staying true. There is a statement on their website that says, “it can take on anything released by the big names in thrash in recent years – take them on and win,” and I don’t think that is a falsehood at all. It would be great to see these guys play alongside Testament, as I am sure that the Brits would give them a run for their money. The music is tight, the drums power it along, and the vocals are perfect.

I do have just one minor niggle though, the first song “Blackened Skies” fades out. Come on guys, you are big boys now, thrash bands don’t fade out, they finish the song properly. Luckily this is the only time it happens, and by the time the listener gets through to the storming introduction of “Unidentified”, it is just a case of turning it up louder and getting rid of the dandruff. Producer Simon Efemey (Amorphis, Paradise Lost, Napalm Death etc.) has done a great job, and captured a sweaty thrash band at their very best. Seriously, this is an essential album for anyone into this style of music. Also, if you join their mailing list then you will be sent a download album called ‘The Ripper Knows The Score’ free of charge, which is a free digital compilation album of the best bits from ‘Nothing Changes’ and ‘Requiem’, and they’ve also included the banned intro to “Predator” as well as re-mastering the songs from the debut. Here is a British thrash band that deserve much wider recognition.

C:Live Collective - The Age Of Insanity

Tiger Moth Tales - The Whispering Of The World