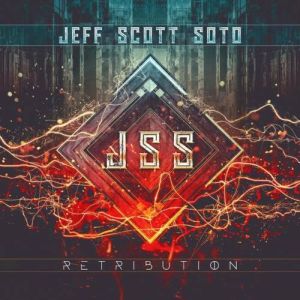 Surely, Jeff Scott Soto needs no introduction, having been an important part of the melodic rock and metal scene for some thirty years now. He was first introduced to the public as the vocalist for guitar virtuoso Yngwie Malmsteen’s iconic first two solo albums before going on to front esteemed hard rock band Talisman, and the live video for “I’ll Be Waiting” is always on my phone, while their album ‘Five Men Live’ is just stunning. Since then he has recorded solo albums, been in other bands and guested with other musicians, and one thing a listener can be sure of is that when JSS is involved then he gives that release a real stamp of quality.

I didn’t even have to put this on to know I was going to enjoy it, and as soon long-time compadré Howie Simon’s guitar came blasting out of the speakers I knew this was yet another good-time, punch your fist in the air style melodic hard rock album. JSS is definitely a singer who thrives in the live environment, check out his ‘Live At The Gods’ release, but he also knows what to do in the studio to maintain the energy levels, which is very much the case here. I’ve only heard a few of his studio albums, including the highly-rated ‘Prism’ from 2002, but this is easily the best I’ve come across. It rocks where it needs to, has loads of melody, while JSS is right on top of his game. He has the ability to provide music that has loads of harmonies and power, with just the right amount of crunch and aggression to remove the saccharine that can sometimes overpower melodic music. Highly recommended.