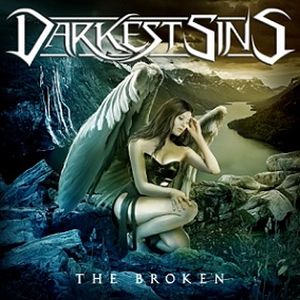 Darkest Sins is a five-piece melodic metal band from Ålesund, Norway founded by Marius Danielsen and Anniken Rasmussen in 2009. This is their debut full-length album, having previously released a demo in 2011 and an EP in 2013. The CD was mixed and mastered by Piet Sielck (Iron Saviour) who also has mixed albums for Blind Guardian, Gamma Ray, Grave Digger, Paragon and many more. They have both a female and male lead singer who share the vocals 50/50, to provide more depth and diversity to what they are doing. Apparently, they have created quite a buzz on the live scene in Norway, and had special guests at their shows including Fabio Lione from Rhapsody of Fire and Tony Mills from TNT, while in July 2016 they supported Anthrax on tour in their home country.

I must admit I don’t really see how that combination would have worked, as I would have thought that these guys were too symphonic and melodic for Anthrax, but if they had toured with someone like Nightwish then their own failings would have been on show. The reason for this is that in some ways Darkest Sins are managing to miss the mark for everyone. They are too heavy and basic for those who enjoy high level melodic metal or symphonic metal, but too sophisticated for those who enjoy power metal. It is okay, but this album could never be any more than that until the band change their approach as they are stuck in no-man’s land at present. Another possibility would be to change the singers, as while Marius has a good voice, there is a lack of confidence and wavering in Anniken’s, and she doesn’t strike me as being the right person to front a band like this.