Castanarc - Journey To The East 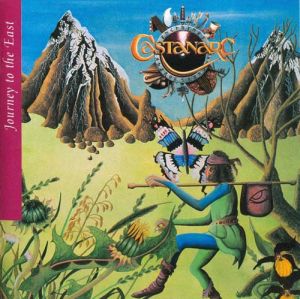 Castanarc began life in Doncaster in 1983, when Mark Holiday (vocals), and David Powell (keyboards) were joined by Paul Ineson (guitar), Neil Duty (guitar, bass) and Dave Kirkland (drums). They soon signed to Peninsula Records and recorded this their debut album in 1984. However, sales figures were never released and royalties not paid, and the band broke up. Holiday and Powell were overheard jamming in local bars by a wealthy entrepreneur who paid for them to return to the studio where they were joined by Vincenzo Lammi (drums), Rich Burns (guitar), Rob Clarke (bass) and Steve Beighton (sax, keyboards). A 12” single was played on Radio One, then in 1989 they signed to RCA and ‘Rude Politics’ was released. A session was recorded and broadcast on Radio One, which was then repeated in 1990, while their current plans are to release a new album this Summer and also to re-record ‘Rude Politics’. It has taken an American label to uncover this lost gem, and very enjoyable it is too. There is more than a hint of Camel about this band, although at times it is also reminiscent of Pendragon. The band rarely rocks, but rather use clever interplay between guitar and keyboards to provide a swirling backdrop for Mark Holiday’s clear vocals. It is these vocals that are at the forefront of the mix, and what the ear is guided towards. The album is not very long, only thirty-eight minutes of eight songs, but anyone interested in melodic or progressive rock in the style of Pendragon and Camel should really check this out. “Rhyme” is one of the shortest songs around, at only 2:41, but the use of acoustic guitar and piano combine with softly sung vocals to make it a beautiful track worth purchasing the album for on its own.