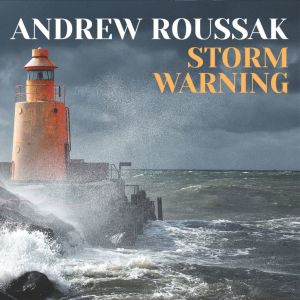 "Storm Warning" is the third solo album of Andrew Roussak - musician born in the Russian city of Ufa, but for many years living and working in Germany (after his first CD "No Trespassing" 2008 and later a classical "Blue Intermezzo" 2010). This time he has prepared the most coherent album with new compositions, more specific and at the same time more... progressive.

On "Storm Warning", Andrew Roussak presents a superb form, he introduces himself as a true master of the black and white keys (although he plays all instruments on this record, with some exceptions, about which in a moment), and he plays it so that without a shade of exaggeration he can be called the heir to the legacy of Keith Emerson.

A novelty, and at the same time undoubtedly a nice attraction, is the participation of vocalists. Andrew has put eight compositions on his new record, three of which are vocal and instrumental pieces. In the most lyrical "Chasing Shadows" we hear the voice of Nadia Ayche, in "Left Alone Outside" - that of Max Kottler, and in the three-part finale (actually in the last part of it), the piece entitled "Malta Sketches" - Selina Waidmann.

As I have already mentioned, Roussak performs all instrumental parts, and it happens that in these three vocal works mentioned, Oli Weislogel plays the solo guitar parts. And I must admit that he plays it so that sparks fly. He definitely added color to the music composed by Roussak, strongly embedded in the rich sound of keyboards.

Another attraction is the song "Can She Excuse My Wrongs" - a classical piece of early music composed by John Downland (1536-1626), with the words written by an unknown author. And our main character sings them in an incredibly beautiful harmonic way.

This is how the classic rock mixes with modern times, rock music with the old, and wonderful instrumental parts are enriched by equally beautiful vocal lines.

I would not hide that Andrew surprised me with this record - and had surprised me very much, and very positively. He plays here with heart, with panache, presents a great form and in fact it is impossible to break away from these epic compositions. The stylistic sympatians similar to Keith Emerson (of course, except for those orthodox ones who say that Emerson is a pinnacle not able to be approached) will be overjoyed. Andrew does not imitate, he does not copy. He simply fits in perfectly with the style set by the Master demonstrating his undoubted talent and enormous executive possibilities. I like this record. I would recommend it.