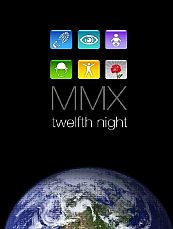 Twelfth Night were a band that I only discovered after they had broken up, and although I was lucky enough to interview Brian Devoil a few times it was always a source of frustration to me that I hadn’t known about them in their heyday – especially as I was living in London at the time. I moved to New Zealand from the UK at about the same time that Clive Mitten returned from Australia to the UK, at which time rumours immediately started regarding reforming the band. Rick Battersby couldn’t make it, although he gave his blessing and best wishes, and multi-instrumentalist Mark Spencer took his place. The shows were incredibly well-received and it became obvious that another tour would be worth undertaking so in 2010 the band again hit the road. However, guitarist Andy Revell couldn’t commit this time so instead TN drafted into two members of Galahad in guitarist Roy Keyworth and keyboard player Dean Baker. This meant that the band were a six piece for the first time, and contained a few multi-instrumentalists so they were able to perform songs that previously they hadn’t been able to give full justice to.

When I played this the first time I made the deliberate decision not to look at the track listing, so that I could enjoy the double DVD as if I was actually there. As expected, they kick off with “The Ceiling Speaks” – one of my favourite songs, and here much more powerful than I have ever heard before. The new members fitted in seamlessly and it is hard to imagine that this band has been dormant for so long. Their last full album was in 1986, and the last new recording they had completed together was their appearance on the Geoff Mann tribute ‘Mannerisms’ in 1994. But, if you listen to “We Are Sane” it sounds as if they have been playing it every night for years – it is incredibly tight.

The first surprise for me “Fur Helene I” which goes all the way back to their very first demo, ‘Skan’, in 1979. Clive has lost none of his touch over the years, his bass playing is still something to behold – absolutely incredible. I seriously could rave over every one of the 18 songs on this set, the way that the band are so tight, Andy’s vocals, or the backing vocals from the enthusiastic crowd, but instead of doing that, let’s just consider track 5. ‘A First New Day’ has always been a TN highlight, but here it is just Andy accompanying himself on electric piano and the passion that comes through is just incredible. This set is worth purchasing for this one song alone, let alone the rest of the concert where the band gel and interplay. But I do also have to mention “The Collector” – when this started my jaw hit the floor. One of Twelfth Night’s longest songs at more than 18 minutes, this was never recorded during the actual career of the band although it was performed live. It was finally recorded for the ‘Collector’s Item’ compilation in 1991 – one of Geoff’s final sessions. All of the power, the angst, the solemnity, the delicacy is there in spades.

Twelfth Night were sadly absent from the UK prog scene for way too long, and to my mind is the most overlooked band in the genre – if ever a band should have been major stars and weren’t then this is them. They have influenced so many bands that we all know and love today, and although I love their contemporaries Pallas and Marillion dearly – they aren’t in the same league. So now there is only question left to answer isn’t there – are we going to see a new studio album? Until (hopefully) then this will be a constant visitor to my player. Progheads – this is essential!