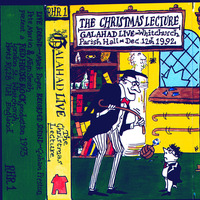 I don’t often review the same album more than once, but here I’ll make an exception given that the last time I wrote about this was in 1993. Back then this album had been released on cassette, and until recently that was still the only format that this was available in (if you could find a copy anywhere). But, the band have now made it available to download from their site so now seems a good time to revisit it. But, before I even mention the album itself, it is necessary to put it into context.

Back in 1992, two brothers (one of whom was landlord of the village pub) were very much into prog and were getting fed up of having to travel to see bands – so the simple solution was to bring the bands to them. The village hall was literally the other side of the road to the pub, so why not approach a few bands? They asked Galahad if they were up for it, and a short while later asked Freewill if they would be the support act – and so in July a group of us made our way to the sleepy village of Whitchurch really not knowing what was going to be in store for us. I don’t think that the people of Whitchurch were ready for a load of progheads descending en masse (but some nice ladies did try to picket the hall), and it quickly became apparent to all that this was going to be a huge success.

So, in December that year there was a two nighter, the first night being headlined by Pendragon with Final Conflict in support, and the second night being headlined by Galahad, again with Freewill and openers this time being local folk rock act The Morrigan. There was the opportunity that night for the bands to record to DAT, and both Freewill and Galahad availed themselves (I love the Freewill set – which has never been made commercially available). It was these tapes that allowed Galahad to release the live tape ‘The Christmas Lecture’. Now, the band had only recently settled on the line-up of Stu, Roy, Karl, Spencer and Neil, with Neil having taken over bass duties from Tim earlier that year, and Karl was also relatively new as he hadn’t been involved with the previous year’s ‘Nothing Is Written’. But even though the hall was packed, these guys weren’t going to show any nerves.

Stu told me before the gig that it was going to be a very special gig, and that they were going to being playing covers and some very old songs (but not ‘Exorcising Demons’ – looking back at the gig review I wrote at the time I felt that was a bad choice and that they should just have played a two hour set..). You can’t tell from the music, but all of the guys were wearing santa hats and Stu started the gig in full Father Christmas costume – that didn’t last too long as this was one of the gigs where there really was sweat running down the walls. The feeling in the hall was electric, and Galahad appeared as conquering heroes. There may have only been a few hundred there, but boy did we enjoy it.

This is still one of my very favourite gigs, even after the best part of 20 years, and to hear these songs played with such enthusiasm and passion (and a certain naivety as well) is a delight throughout. “Room 801” was always a great song live, with much more depth and passion than the studio version, “Sleepers” was being aired some three years out from when it would eventually appear, they played “The Knife”, “Clocks” and even treated us to the end of “One For The Record”!

If you weren’t there that night (and most of you weren’t, be honest) then you missed seeing one of our finest prog bands at their very best in front of a crowd that wanted a good time. The gigs in the village hall went on for a while longer (I still can’t believe that I saw Steve Hackett play a full gig in a church hall!!) before moving out to the Community College, but after a few years it had all stopped which is a great shame. When my third daughter was born in 1993 my wife was wearing a Whitchurch Red House t-shirt, and the night before our wedding later that year was spent by me and “young” Mark Colton at that establishment having a few libations. Listening to this album brings it all back as if it was yesterday (first time I saw Threshold was in Whitchurch as well thinking about it, saw Jadis there as well, and Martin Orford playing IQ songs as a solo artist was just stunning) – if you have never heard it, or wondered why this little tape garnered so much attention at the time, then you owe it to yourself to get onto the site and order it for yourself.