Red Jasper - Sting In The Tale 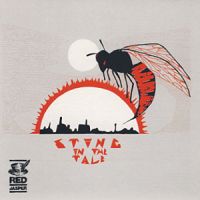 Towards the end of 2011 I was perusing through the internet, and started thinking about bands that I used to deal with in the early Nineties and this led me to conduct a search for Red Jasper. I was surprised but extremely pleased to see that they were again active, and that they had an interesting website. The person I always used to talk to had been singer Davey Dodds, but he is no longer involved, so I thought that I would contact them and see how they were doing. Drummer/singer DC and I were soon swapping emails and I offered to send him copies of every review I had ever written on the band, and eventually managed to be organized enough to be able to do so. DC told me that he was hoping to find a record label that may be interested in releasing all of their old albums on CD, and I asked if he had thought of Angel Air and would he like an introduction to the person in charge? And so it was that a few weeks later the band had agreed with the label to reissue five albums, with ‘Sting In The Tale’ to be the first (which also includes as a bonus the songs from the “Pull That Thumb…(off the top of your head)” EP), and that yours truly was going to be writing all of the booklets.

As I write this only ‘Sting’ has been reissued to date, but ‘A Midsummer Night’s Dream’/‘The Winter’s Tale’ will soon be available as a double pack, with ‘Action Replay’ following soon afterwards. Of course, some people may now say that isn’t really possible for me to be completely objective when writing a review, so perhaps it might be best to go back to what I said all those years ago: “you cannot fail to fall in love with this. Red Jasper’s strength is not only their musical and song-writing ability but the fact that within each song they combine instruments and moods in a constructive, challenging yet interesting manner.” I still stand by that: this is an album of music where the guys are challenging each other throughout – a real refusal to fit into any one particular style and heavily political to boot. What I find really interesting is that this album was originally recorded and released in 1990 yet here in 2012 it is still a damn fine listen and hasn’t dated at all.

If you enjoy folk rock with more than just a hint of edge and power (described by Davey himself as “Motörhead meets Jethro Tull”), then this is for you. Mention must be made of the fine remastering that Lloyd George has undertaken, and come to think of it the text in the booklet is particularly interesting as well…..