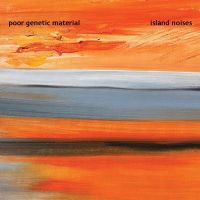 Poor Genetic Material was founded by Stefan Glomb (guitar) and Philipp Jaehne (keyboards) as an experimental project mainly working on soundtrack material. Singer Philip Griffiths (son of the legendary Beggars Opera singer Martin Griffiths) joined the original duo to work and record together and line-up changes brought in bass player Dennis Sturm and drummer Dominik Steinbacher along with flautist Pia Darmstaedter. The different personnel also saw a movement in musical direction and they became more prog and songs oriented. ‘Island Noises’ is their seventh release, and is a double concept album that is based on Shakespeare’s ‘The Tempest’. I can just imagine the gnashing of teeth in certain quarters who felt that musical elitism was blown away by the ‘fresh air’ of punk music.

It is not a retelling of the play itself, but rather a story based on elements and themes that can be found within it (so Caliban gets a whole song to himself). Of course, a decent epic prog concept album like this needs a narrator so Philip convinced his dad to step up to the mike once more (somewhat like Rick Wakeman narrating ‘Jabberwocky’ for Oliver). Not surprisingly that gained a lot of attention by some, but to be honest it is exactly what it is – a linking performance to assist in bringing the whole thing together. Although this does have songs, in reality it is much more about being a single piece of music with movements. In places it is dreamy and at others quite Hackett-ish, all the time with a certain ethereal other worldly quality which is definitely in keeping with the subject matter. It is music that those into early Seventies prog will get a lot from, as opposed to those who prefer their prog to be more neo and rocky. Philip has a great voice, much like a young Michael Sadler at times, but although there are many layers of keyboards this is much more trad prog than Saga.

Overall a very enjoyable album, but be warned that at 1 hour 37 minutes it is a lot to listen to in one sitting, but rewards those who have the time to do so. It is not something that is easy to dip in and out of.