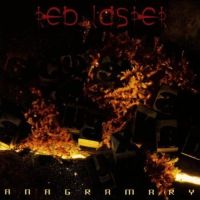 And so we come to the end of the first phase of Red Jasper. Following on from the two albums recorded for SI Music and the promotional touring that followed it the band took a break, and by the time that they came back together to record what was to be their final album the band had moved in different directions. In fact singer Davey Dodds wasn’t involved a great deal in the writing process, which was spread out much more evenly over the remaining four guys. The album was recorded at the same studio as the previous two, but this time Davey was only there when it was time for him to record his vocals and it was little surprise that the band broke up not long afterwards. As Davey had been involved with many publications as the main contact, it also wasn’t surprising that few even knew that it had been released as he bowed out of proceedings.

Although I had been a fan of the other albums I didn’t actually hear ‘Anagramary’ until 2011, some fourteen years after it was originally released, so in many ways this is a ‘new’ album for me and looking back it is possible to see that here was a band in transition. Davey no longer took lead vocals on all songs, with drummer DC stepping to the fore and giving the band a different sound with “In Her Eyes” being both a departure and yet also familiar. There are times when Lloyd is content with piano, but there are others when swathes of Hammonds are what is required while the rest of the guys show why the band were mentioned as being “Motorhead meets Jethro Tull”.

It is hard to fathom that this album basically sank without trace, being known to only a select few, and that it has taken 15 years for it to be made widely available again, but here it is with a bonus live number (and again a great booklet) and if you enjoy prog that is very English in its’ style then this is essential. Red Jasper are recording again in 2012, with DC as the lead singer and new drummer Nick Harradence (Shadowland) filling his drum seat, and are playing the Fleece in December so get your tickets now!!

If, like me, you will be unable to attend (I live the other side of the world, what’s your excuse?) then you will just have to satisfy your musical cravings by picking up all of the Angel Air reissues.