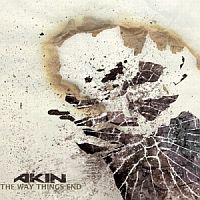 Formed in 1998 in Lyon (France), Akin were heavily influenced by  Anathema, The Porcupine Tree and Opeth. Their first demo was positively received and they consequently signed with Sacral Productions for ‘Verse’ I 2001 and ‘Forecast’ in 2003. Both of these were very well received in France and assisted in them getting the gig to open for bands such as Within Temptation, Dark Tranquility, Epica and others during 2002 and 2003. There then followed a long period of inactivity from the band and it was only in 2009 that they got back together to work on ‘The Way Things End’ which was released by Progrock Records in 2011.

I wonder why the band took such a long break, as if the earlier albums are anything like this then they literally have the world at their feet. Although bands like Legend have never gained the attention they deserved, over recent years symphonic metal/prog bands fronted by female singers with a great range have been coming very popular. In many ways Akin remind me especially of Within Temptation, and also Epica and Nightwish (the Anette Olzon version, not Tarja Turunen). This is powerful music with great interplay between all of the musicians,  often coming from a metallic area but they also use a string quartet to bring an additional edge to proceedings and whatever the band is doing behind her singer Adeline Gurtner is more than up to the task. This is a great album that should find a lot of fans. It is also possible to go to Bandcamp and listen and purchase their earlier works http://akin69.bandcamp.com.

Go to: www.progrockrecords.com for more information.