Skys, The - Colours Of The Desert 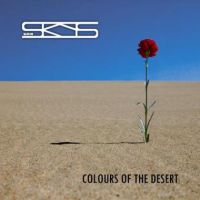 It never ceases to amaze me how music can make the world such a small place. I first heard from Jonas Ciurlionis back in 2006, when I was still in the UK and I reviewed ‘Postmodern Game’. Now in 2012 I am reviewing the follow-up ‘Colours Of The Desert’ which has just been released on CD (it was available as a download last year) and I live in NZ, but Jonas, Bozena, Alexandr and Justines still live in Lithuania where they are recognized as one of that country’s top bands. What is also interesting about this release is the quality of the guests who have been involved: Dave Kilminster (I think I have seen Dave in concert on at least three occasions, Roger Waters earlier this year, plus John Wetton and The Nice), John Young (ex-Scorpions, Bonnie Tyler, Greenslade) who also produced the album, Snake Davis (Eurythmics, P.McCartney, Ray Charles, James Brown, etc.), Martin Beedle (Cutting Crew, Sarah Brightman, etc), Tony Spada (Holding Pattern) and Anne Marie Helder (Mostly Autumn, Panic Room). Not bad for a band that have yet to make a huge impact on the wider prog scene.

I do say “yet” as it surely can only be a matter of time. This is a stonking album, with great musicianship and songs throughout. The most obvious comparison is probably with Pink Floyd, but there are also elements of Renaissance, Marillion and others. This is a group that is happy to playing complex intricate prog at speed, or weave a soundscape that beguiles and brings the listener in to its’ embrace. The use of female and male lead vocal interplay is particularly effective and overall this is an uplifting piece of work that surely must get them more recognized on the global prog scene. If you enjoy progressive music then you can’t afford to miss this as it hits all of the right buttons – solid from start to finish and a delight to listen to. Not quite 5 stars, but bloody close.