Mark Dean's Caldera - No Man Is An Island 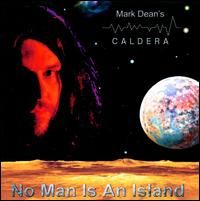 I have been in contact with Mark quite a lot recently concerning Tim Morse’s latest album, and it was during one of these exchanges that I mentioned that I hadn’t heard his own album which he then kindly sent along. I seem to have been writing quite a lot about multi-instrumentalists recently, and here is yet another example. Over five years Mark recorded every note, sang his heart out and of course also engineered and produced it. This doesn’t sound like a solo effort, but that of a band who are in perfect harmony with each other. Some of the songs are very heavy indeed, but there is such a mix that there is something here for everyone.

The song “Do I Care” is a typical example. It starts off with some extremely heavy almost doom-laden riffs before breaking into something that I can only describe as being some of the best Living Color that I have heard in years. Normally solo musicians start on keyboards or guitar and fail at either vocals or by using a drum machine, but Mark knows the importance of ‘real’ drums in a rock context and more than proves himself to be a fine drummer – although only he will know if they were recorded ‘live’ or had many hours of rerecording and splicing to get it right.

But that’s the point, it is right. In fact this is a very enjoyable hard rock album with progressive tendencies. You may have to have eclectic tastes to get the most out of it, but I do so that’s fine with me. Well worth investigating.