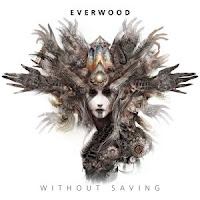 I have to be honest and say that I don’t know many bands from Hungary: the obvious exception for me up to now has been After Crying who have released some stunning progressive/art rock albums over the years – but with Everwood I am now wondering what else I might be missing from that country as this is just superb. However, unlike After Crying, one would be hard pressed to pick this as an Eastern European act as if I hadn’t read the press release or seen the musician’s names I would have assumed that they were American. One more thing that you need to be aware of when playing this, is that to my ears it isn’t prog – whatever the label may think.

This is symphonic melodic metal/heavy AOR, with an emphasis on all of the elements that one would expect from those genres. It is an album full of hooks, with great vocals and musicianship throughout and is totally accessible on the very first play. In fact, I was surprised at just how loud I ended up playing this as it is just so good that I kept cranking it up a little more. There may be just enough complexity within this for those who enjoy Dream Theater, but in truth this is more Rhapsody of Fire, Symphony X or a heavy Toto. Overall it is a great album, with power ballads and rockers for all.