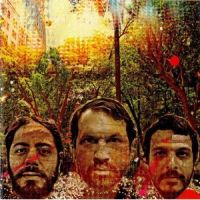 There are times when I come across a jazz album that breaks through traditional boundaries and creates something that is quite different to anything I have heard before, and that is definitely true of this the SPU’s third album. The press release that accompanies this states “you’ll reach for such sonic signifiers as “jazz,” “Brazilian music,” “avant-garde,” and “electro-acoustic” in an attempt to tag ‘Três Cabeças Loucuras’.. when American cornetist Rob Mazurek gets together with his Brazilian buddies Guilherme Granado (keyboards, electronics), Mauricio Takara (drums, percussion, cavaquinho (a small string instrument of the guitar family with four wire or gut strings), electronics) and “fourth member” Richard Ribeiro (drums), all of the aforementioned flavours are on the musical menu, but ultimately, it’s best to just term the end result a kind of joyful “chef’s surprise” that gleefully upends expectations".

It is definitely jazz, and often avant-garde, but it is the way that the guys approach this and the instrumentation that they use that makes it so inspired. There are pieces that are very dreamy, with keyboards and electronic sounds being quite reminiscent of Can, while at others this is full-on. Mazurek has studied with Art Farmer, and it shows, while of course Miles Davis is also an obvious inspiration although Mazurek himself states that Bill Dixon is his biggest inspiration.

I know that I don’t listen to nearly as much jazz as I should, something I am working on, but this is an inspired album that fans of jazz or avant-garde music in general will get a great deal from. Visit www.cuneiformrecords.com for more information.