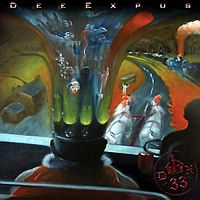 DeeExpus were formed in 2007 when guitarist and multi-instrumentalist Andy Ditchfield met up with singer Tony Wright, and they decided to put a band together. However, they found that they worked together really well and instead of forming a complete outfit just brought in a few guests to assist and ‘Halfway Home’ was released in 2008. A band was formed for the live shows, and then in 2010 it was time to start on the second album. It was about this time that Mark Kelly became involved and joined the band as a full member – of all of the Marillion guys it is Mark that has produced the least amount in terms of additional projects, so it shows that he was keen on what he had heard. His keyboards are also much more than just an added extra, as his runs and interplay on “Maybe September” reminded me why I first fell in love with his other band thirty years ago. The line-up here has been completed by John Dawson on bass and Henry Rogers on drums (while none other than Nik Kershaw provides lead vocals on ‘The Memo’).

This certainly doesn’t sound like only the second album, as it is a hugely polished effort moving from riffs to gentle piano and through a gamut of neo-progtastic moves. There are areas of extreme delicacy such as gentle piano, fretless bass and acoustic 12-string on “Marty and the Magic Moose” before Andy let’s fly with a great guitar solo and the band brings it all together. If you enjoy bands like IQ and Galahad, then this is something you need to seek out. Mark has had to take a temporary break from the band so he has been replaced for live work by Mike Varty (Credo/Landmarq/ Shadowland) as they support Marillion on their UK tour. If you have yet to come across these guys then you need to go to www.deeexpus.com to find out more.