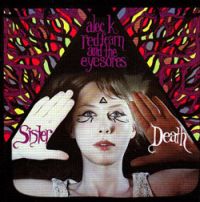 This is the seventh album from Alec and his band, who have been purveying their rather unique style of alternative music for more than ten years now. The music is complex and very different, grounded in his own accordion work, but somehow it is also easy to listen to with its’ melodic nod back the era of psychedelia when anything was possible.  To say that there is an eclectic mix of instrumentation is something of an understatement as the band deploy stand up bass, accordion, French horn, percussion, doumbek, organ, and electronics, among others. This really is music that refuses to be pigeonholed, with The Velvet Underground, Tom Waits and Frank Zappa just some of the obvious influences.  The songs are all very different to each other, so while krautrock may have an effect on one song the next could well be from French café culture.

There is no doubt that the discovery of Orion Rigel Dommisse has had a major effect on the band as her high clear vocals provide another facet to the experience, sometimes taking lead or harmonising with Alec her voice is a delight. Sadly, an album that contains this much depth and musical ability will be ignored by much of the mainstream and is unlikely to get the recognition it so richly deserves, especially as it refuses to sit in any particular category. But, if you enjoy ‘good music’ without worrying about what the label says on the packaging then you need to investigate this further.