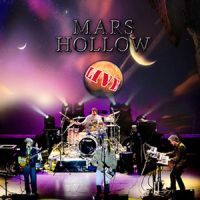 I hate it when I seem to be the last to know what is going on within the prog world. Back when I was running Feedback I seemed to know what was happening most of the time, but that was certainly easier in the early days when everything was by letter or phone. Of course, now we have the world of the internet which allows me in NZ to download an album from America: the only issue I have with all of that is that this Mars Hollow’s third release and it is the first time I have come across them! Normally I will play an album for quite a while before I write about it, but I only got this yesterday and here I am writing just because if I don’t it will stay on the player for the next month and I won’t get anything else reviewed!

Back in 2005 drummer Jerry Beller and bassist Kerry Chicoine worked on a project with Ryo Okumoto (Spock’s Beard) and after that ended they decided formed their own band with Steve Mauk (keyboards) and John Baker (lead vocals/guitars). They released their debut in 2010 and followed it up a year later, which is also when they were asked to appear at RosFest where this album was recorded. The band have a different approach to may within the prog scene, imagine Rush with Spock’s Beard combining with ‘Discipline’ era King Crimson and then dropping in some Yes (particularly with the bass sound)and Kansas references here and there. Every musician is a virtuoso, which allows for intricate interplay along with almost Gentle Giant-style harmonies.

I have read one review where it was stated that the reviewer hadn’t been this excited about a new prog band since he first heard Spock’s Beard, and while I may not go quite that far I certainly can understand the statement. The band had a dramatic line-up change at the beginning of this year with both Beller and Chicoine leaving, but they have been replaced by bassist Joe August and new drummer Bob Craft and these four recorded the bonus studio song “So Far Away”. Based on this I can’t wait to hear the next album.

If like me you hadn’t come across this band then you need to go to their website to discover more. The new song is being released as a single, so why not give them a try?