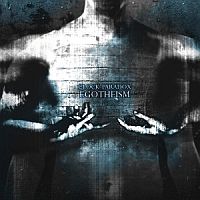 The beginnings of Clock Paradox can be traced back to 2009 when Antti Karhu (The Man-Eating Tree) and Jyrki Hiltunen (Impish, Rectum) decided to join forces. They knew that they wanted to stretch the normally accepted definition of death metal into a more progressive area and when they were joined by drummer Jani Kuorikoski (Depth Beyond One’s, Joint Depression) they started recording material. During this period they were looking for a bassist so that they could gig, and in came Timo Tyynismaa (Komi Bell) which allowed them to move forward. After a while Antti felt that he needed to concentrate on guitar so the final piece fell into place when Jouni Koskela (Abysmalia, Vermivore) arrived.

‘Egotheism’ is their debut full length album, and they have already proved that they are different to the norm even before putting it on the player, as this is a concept album – how many death bands have done that? It describes a psychopath's views on himself, other people and life in general in a diary-esque fashion. The soundtrack for this trip into the deepest reaches of the human mind is based on the progressive wing of traditional death metal where a brooding atmosphere is merged with solid compositions.

It contains the edginess and heaviness that the genre demands, yet at the same time there is a smoothing of the edges, not taking away any of the power but instead emphasising the dynamics. Although it has to be said that Clock Paradox are more melodic, in many ways they remind me of The Axis of Perdition in their approach and the result is an album of depth and power. If you enjoy your metal to be heavy but also to allow you to think then this is something that needs to be investigated as it is one of the finest death albums you are likely to come across.