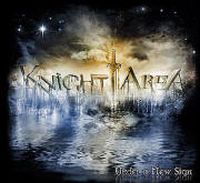 I liked the first album of this Dutch band. I like it… and that’s it. Despite common enthusiastic reviews, I didn’t find “The Sun Also Rises” as groundbreaking or timeless recording. In fact, sometimes I felt it was just the opposite, at times the sound seemed too synthetic to me and put together kind of clumsily, unnaturally. However, what I have to admit is that this album contained a great deal of beautiful melodies, which showed how talented the brothers Gerben and Joop Klazinga were. They gathered a lot of respected Dutch prog rock musicians from the bands Cliffhanger, Miracle and Sangamo, so as to try to conquer the neoprogressive world under Knight Area flag. And I have to admit that they succeeded. Their debut from 3 years ago was quite a success, although – I’ll repeat myself – I “just” liked it. I was far from admiration and euphoria.

As far as the new album is concerned, I am much closer to these feelings, though. “Under A New Sign” is simply a greater artistic success and a big step forward. It makes much more reliable impression and it seems that this time there was more team work and there are many wonderful melodies played by the band in a thorough and well-thought over way. The band have matured. On “Under A New Sign” we have music with great guitar parts, bass parts, drums parts, synthesizers parts and frequent mellotron eruptions. I could say lots of good things about each of seven tracks on this album. Melodies stick in memory immediately. Bombastic symphonic atmosphere is present almost during the whole playing time, and all of this is crowned with the great Mark Smit’s vocal. Knight Area have handled “the second album syndrome” very well and they deserve applause for it. On “Under A New Sign” there is no a single weak song, and it doesn’t matter if it’s an uptempo instrumental title track, or a ballad “Courteous Love” with lovely violin and flute parts, or “Dreamweaver” with great choruses, or “A Different Man” which is split into two parts (like “In The Presence Of Enemies” from the new Dream Theater album: the first part is at the beginning and the second one at the end of the album), or sounding almost like two top notch neoprogressive patterns: “Exit L.U.M.C.” and “Mastermind”. All of them are delightful because of their unique harmony, nice atmospheres, their undeniable beauty and maturity that is pretty rare from such a young band. After having at the most 2-3 spins at listening to the album, the individual compositions seem to be strangely familiar. At first, I was quite surprised with this, but after a short time my ear started to recognize the analogies or even some borrowed musical themes from other recordings. On this album there is not only the atmosphere of Genesis’ music (approximately from the times of “Wind And Wuthering” album), but first and foremost, there are evident quotations from Arena’s, Pallas’ and IQ’s music. If you don’t believe, listen to the final section of “A Different Man Part II” (I admit that it makes a real great impression) with its epic flow. I think it’s a replica of “Atlantis” suite. However, in this case borrowing the good musical ideas are not a problem for me at all. Probably that’s why I like “Under A New Sign” so much, to say the least, because since some time I’m truly charmed by it.