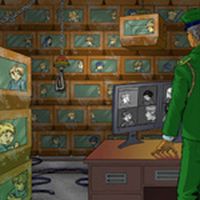 Red Sand play on their music – regardless of accusations of repeating themselves, of regression, of sticking to tried and tested musical methods. This Canadian group led by Simon Caron, don’t care about all of these. They play their music in such a way that they win over the listeners who love classic neoprogressive atmospheres. Red Sand has particularly took a liking to the climate of early Marillion recordings, so it comes as no surprise that they have gained such a good reputation among progressive sounds’ fans so quickly.

“Human Trafficking” is the third album of this band. Released at the end of 2004, CD entitled “Mirror Of Insanity” turned out to be a real sensation in progressive circles. Red Sand presented three long, very epic suites, which struck the chord with the fans of sound a’la Marillion. The following year, the next album saw the light of day. On “Gentry” Red Sand used patents similar to those on the previous album (two suites plus two shorter tracks), although they recorded it in the fundamentally changed lineup. Then, as the lineup was steady (the only change is the absence of the keyboard player Pierre Massicotte whose role was taken over by the leader, guitarist and compose in the person of Simon Caron), the band proceeded to work on new album.

Dedicated fans will be delighted, the opponents will have reasons to further critic: Red Sand’s music hasn’t changed at all. The new album is almost a copy of two previous albums – in every respect: style, sound, composing and performance. Once again, the album is founded on two long compositions (“Regrets” – a real magnum opus of the album, plus the wonderful title suite), and there are two shorter (lasting less than five minutes each) tracks: “Lost” (instrumental one) and “Loving Child”, which closes “Human Trafficking” album  in a very sublime way.

So there is not much new on this Red Sand’s album. But is it really necessary to change something that has worked well on previous albums?  What is most important in music, is the sincere message and honesty with the listeners, and on “Human Trafficking” it is clearly heard that Red Sand play music that they’ve liked since the very beginning of their activity. It’s clear that they take pleasure in playing, disregarding so called fashions, trends and potential critic.  Thoughtless opponents claim that their music is just rehashing the old ideas, but for Red Sand it is a natural turn to the music of the past so as to draw on those elements which people long to listen to – as nobody wants to play them – or no one is capable of doing it. That’s why I will defend Red Sand’s work and their leader’s musical ideas. On the other hand, I doubt that this new album will repeat the success of its predecessors, especially the debut album. It’s not because it is worse or less interesting than previous albums, but because of something else: there won’t be the element of surprise this time (or it won’t work on such a large scale). On “Human Trafficking” Red Sand follow the same path that they created on their first album and fortunately (I emphesize: fortunately!) don’t deviate from it at all.

I have to say that in Red Sand’s music there is a bit of sentimentality and nostalgia for the bygone times and also for the longing for little archaic atmosheres, but there is a dose of emotional charge that is few and far between, there are many beautiful melodies and epic flow of all the compositions. There are a number of breathtaking guitar parts by Caron, accompanied by monumentally sounding keyboards. There’s also a very good section: Mathieu Gosselin (bg) – Perry Angelillo (dr). At the end – there’s the inspired, theatrical Steff’s vocal. There’s the Music. Exactly – the Music. Because Red Sand just play the Music, which we can listen to with an enormous satisfaction. Especially, when one feels a longing for the oldest Marillion works.