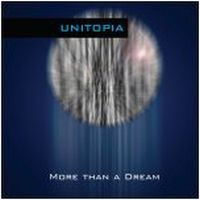 There are more and more very good albums coming from the far Australia recently. “More Than A Dream” by Unitopia, released originally in 2005 has been recently re-released by the renowned record company Unicorn Records and quickly it became one of the bestsellers in their thick catalogue.

Unitopia is a project of two musicians: Mark Trueack (k, v) and Sean Timms (g, v), who are accompanied by the numerous co-operators. Both of them started composing together in 1997, but their debut album was not released until 2005. It’s hard to say that “More Than A Dream” is a purely progressive album, because we can hear an unusually wide spectrum of different styles and genres, varying from traditional rock, through art rock, to the symphonic, ethnic and even dance music. The band mix both the classical and contemporary influences, and in that sense, Unitopia’s music surely deserves to be called the “progressive” one. If you remember Kevin Gilbert’s albums, or those of American formation Simon Apple, then you will surely find the familiar style and similar way of musical expression on “More Than A Dream” album.  The music played by Unitopia impresses with the real swing and flair. Trueack and Timms are very talented musicians, who know perfectly well how to arrange their music in order to achieve the maximum professional effect. To realize their ideas, they have even employed the symphonic orchestra conducted by Tim Sexton. And even though the material on their album is very diverse, it should intrigue the most the listeners who enjoy the style a’la Peter Gabriel (circa “So” and “Up” albums), solo Phil Collins stuff, or even Genesis (from the period of more commercial-hits era of “Duke” and “Abacab”), Mike & The Mechanics and Transatlantic (I bet that in the title recording I can hear the main theme of “Motherless Children” from the famous „Duel With The Devil” suite).

Unitopia mix deftly many styles, thanks to which the album seems to be very diverse. I need to stress, however, that it does not offend, but is a real asset of the album. That’s why the album „More Than A Dream” undoubtedly should be considered a musical event of a substantial importance.