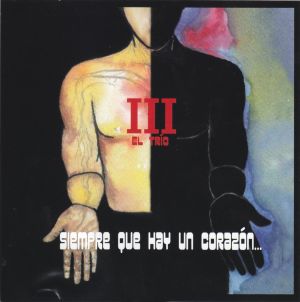 El Trio is a jazz rock fusion trio from Dominican Republic, formed in 2003 by Jonatan Piña Duluc (vocals, guitar, keyboard, saxophone, producer), Kilvin Peña (bass, backing vocals) and Pablo Peña (drums, backing vocals).  ‘Siempre Que Hay Un Corazón...’ (Whenever there is a heart) was their debut album, original released in 2007 and now digitally reissued in 2017 by Progshine Records. As far as I’m aware, this is the first band I have heard from the Dominican Republic, but music really doesn’t have any boundaries, and this in Jonatan they have a quite outstanding guitarist, who can shred with the best of them.

It is obvious that Kilvin is playing a fretless bass, which allows for some real warmth and depth, while his relationship with Pablo is incredibly strong. For me the songs that really work are those without such a high South American feel to them, as these move more to the mainstream. Also, Jonatan is an okay singer, but nothing more than that and I personally would have liked to have heard more passages where he is leading proceedings with his sterling guitarwork. Given that this was a self-release the production is strong, and I can see why Progshine Records have decided to make this available once again. For more details on this and others, visit https://progshinerecords.bandcamp.com