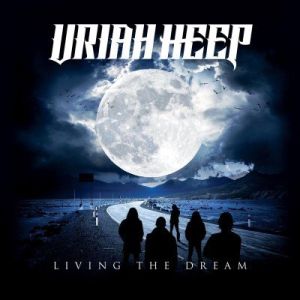 It is hard to imagine in this world of 24/7 connectivity, but there was once a time where there was no such thing as internet. Consequently the only way to discover information was by buying books, and I have just gone to bookcase and brought out ‘The International Encyclopedia of Hard Rock & Heavy Metal’, written by Tony Jasper and Derek Oliver and published in 1983. Why? Because the front cover is a picture of Mick Box in his natural environment, on stage, and nearly fifty years on from when Uriah Heep were formed he is still there. True, there have been some line-up changes over the years, but from 1986 to 2007 they were the same five guys treading the boards wherever anyone would have them play, often without record label support. Phil Lanzon (keyboards) and Bernie Shaw (vocals) have been in the band since 1986 (although they started working together in Grand Prix before that), while drummer Lee Kerslake had to retire in 2007 due to ill health, and was replaced by Russell Gilbrook while bassist Trevor Bolder sadly passed away in 2013 and was replaced by Davey Rimmer.

When they released their debut album in 1970, it was famously reviewed by Rolling Stone magazine's Melissa Mills who began her review by saying, "If this group makes it I'll have to commit suicide. From the first note you know you don't want to hear any more." Well, with one classic album after another in the Seventies, and various “return to form” albums such as the mighty ‘Abominog’, it is safe to say that Heep have not only made it but have thrived. This is their 25th studio album, and although they have become more polished over the years, there is still a Hammond Organ as the backbone, while Mick Box is refusing to settle into his dotage. Apparently he is 71 years old now, and is still teaching young ‘uns a tricks or two.

Any fan of the band will listen to the harmonies at the introduction to “Rocks In The Road” and smile, as it is exactly the same sound they were producing more than 40 years ago. To celebrate the album they are undertaking a world tour which will encompass 61 countries, again putting bands half their age to shame.

Uriah Heep, Very 'eavy... Very 'umble, still hitting the road, producing great music as they continue to keep living the dream. Essential for any fan, and if you have never actually heard any of their albums (and I guess that is a possibility, maybe) then start with this one and then head back to the early Seventies and give yourself a treat. All together now, “Was only seventeen, I fell in love with a gypsy queen…”