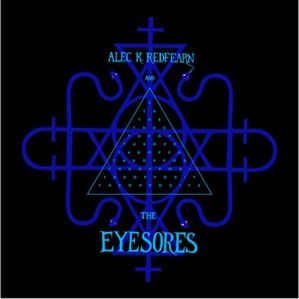 Six years on from ‘Sister Death’, and Redfearn is back with his latest album with The Eyesores. Just one look at the line-up lets know that this is quite a different approach to many. Here we have Alec K. Redfearn (electrified accordion, vocals, Realistic MG-1, loops, ceremonial bell, combo organ), Ann Schattle (French horn), Christopher Sadlers (contrabass, loops, vocals) and Matt McLaren (drums, cymbals, riq, maracas, frikywa, giraffe bells, ring of edges). It comes across as Zappa playing RIO, mixing Art Zoyd with Krautrock to make music which is both intensely challenging and ( to me) incredibly compelling. The use of an accordion as often the main lead instrument, and the horn providing back-up melody, is both different but somehow totally natural.

This is a much stripped down version of the band that appeared on the last album, as not only is the core band much smaller but there are also no guests. I was rather surprised to see Orion Rigel Dommisse is no longer involved, given how important her vocals were to that release, but version appears far more focussed and edgy, while somehow managing to maintain accessibility as they continue to push boundaries. Very solid and intriguing indeed.